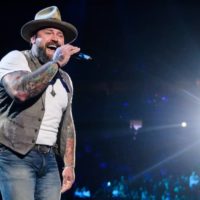 Zac Brown Band is back with new music, releasing their latest songs “Old Love Song (listen here)” and “Out in the Middle (listen here)” co-written with Luke Combs, Ben Simonetti and Jonathan Singleton.

Zac Brown Band wrote on Instagram:  Out in the Middle & Old Love Song are out now! It’s been awesome to have the band back together in the studio and we hope you’re loving the new tunes.”

Zac Brown Band will also be launching a new tour, The Comeback Tour, in August.