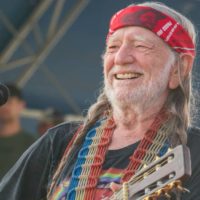 Filmmakers Oren Moverman and Thomm Zimny are co-directing the project, and said in a statement: “Words like ‘honored,’ ‘excited’ and ‘humbled’ don’t come close to describing the way we feel about being entrusted with telling Willie’s story. And what a story it is! We are celebrating the music, the career, the long road, the family, friends and history … But more than anything, we are piecing together a narrative — one never before seen in its entirety — about an extraordinary man with a unique ability to bring people together. These days, we sure could use the healing powers of Willie Nelson.”

So far, no information has been released on how viewers will watch the docuseries. In the meantime, Nelson will be keeping busy, taking his annual Farm Aid benefit concert back to an in-person format for 2021, taking place in September. The singer’s traveling Outlaw Music Festival is also set to resume this fall, with artists including Chris Stapleton, Sturgill Simpson, Yola, Gov’t Mule and Margo Price joining him on dates in late August and September.

Carly Pearce announces dates for her upcoming ‘The 29 Tour’