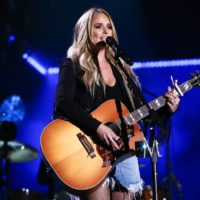 Country superstar Miranda Lambert has been inducted into the National Cowgirl Hall of Fame. Lambert joins a class of women who embody the adventurous, self-reliant spirit of the old American frontier. The National Cowgirl Hall of Fame is meant to honor and celebrate women “whose lives exemplify the courage, resilience and independence that helped shape the West, and fosters an appreciation” for those ideals. Miranda Lambert was being honored for her fundraising and pet-adoption efforts through her non-profit, MuttNation, and she’s joined by fellow inductees Pop Chalee, Lari Dee Guy, Lavonna “Shorty” Koger and Kathryn Kusner are the other women recognized this year, along with Patsy Montana Award recipient Christina Voros and Sergeant Reckless Award recipient Lucca K458.

Lambert returned to her home state with her husband, Brendan McLoughlin, for the ceremony and posted on social media about the honor, writing in part:  “Tuesday October 26 2021 is a day I will never forget as long as I live. That is the day I got inducted into the National Cowgirl Hall Of Fame in Ft. Worth Texas,” she wrote. “It is truly one of the greatest honors of my life. I am beyond grateful to join such an amazing group of women. I’m still processing this and will be for a long time.”

The honor comes just days after the release of Lambert’s new single, “If I Was a Cowboy”; take a look at the video for the song – here.